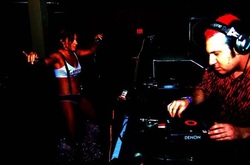 DJ Bio:  A San Diegan native, beginning his career as a Vinyl  Disk Jockey in 1996.  Jack Tripper has since performed for many diverse audiences touching upon nearly every style of music imaginable.  His DJ sound is as diverse as his crowd unique, yet maintains a signature style that will transcend genre at times to unify the dance floor. Tribal Electro Vocal Progressive Breakbeats Deep Techno House Funky Glitch Dubstep Trip Hop Acid Jazz Rock Funk Disco Old School Nu-Skool Fusion and Original Mashups with other familiar elements thrown into the remix.  He can get any crowd moving, as proven through his successful residencies at the Air Conditioned Lounge and Club Kadan.

Inspired from the legendary Burning Man festivals, he began throwing his first "Turntable-Evangelism" parties in 2005 starting with the "Eden" series of events at The Hole, Point Loma.  He landed his second event hosting / promotions / DJ residency with "Underground Playground" at Club Kadan in North Park, embracing the opportunity to play Underground Electronica while helping showcase local Talent alongside guests.  Other residencies, special appearances, and mobile DJ work quickly followed including "Happy Hour"  & "Chillaxation" at the Air Conditioned Lounge, Bring Your Own Mondays at Kadan, Disco Tuesdays at The Brass Rail, Mashed Up Wednesdays at Dino's, Minus1 Lounge Thursdays at The Keating, and South Park Bar & Grill on Friday's.  This variety allowed him to explore his wide range of musical passions including Trip Hop, Acid Jazz, Lounge, Chill, and Mash-ups while establishing a professional career in the Entertainment Industry.

From big room nightclub venues, upscale lounges,  intimate private parties,  industry nights, corporate events, weddings, mobile DJ gigs, colorful performance art festivals, raves, and other tribal style gatherings in the deserts mountains and forests, he's played the gamut of locations in his DJ Portfolio.  Holding a particular reverence for the hours of early Dawn, he gained a reputation for his special Sunrise sets.  He brings these experiences with him to every occasion where invited to perform, embracing the opportunity to contribute his unique abilities as a performer.  He's a Paradox just like the music he Mashes Up.  He continues to play in the Spirit is in the Underground, yet is capable of keeping any Industry friendly crowd pleased with his diverse abilities, eclectic tastes, and wide range of musical knowledge.

Founding father of Turntable-Evangelism, Jack Tripper is a pioneer with Visions for the future of the Global Dance Movement.  An innovator and revolutionary with roots, he's currently working on original music to add to his always growing repertoire.   Catch his infectious vibe that makes you want to jump right in to join the party!

Visit www.DJJackTripper.com and www.Turntable-Evangelism.com to find out what all the buzz is about.