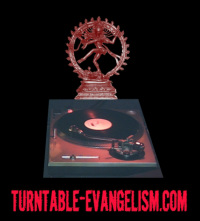 Turntable-Evangelism.com
Its Jack Tripper's personal vision.  Back in 1996, a young man named Jack began a long strange Trip, the journey of a lifetime.  That Summer he was invited to his first outdoor DJ style musical gathering, the "Magical Sunshine Festival".  This exposed him to a whole new world of musical and lifestyle choices he never knew existed.  Fascinated, he began learning all he could about the music, DJ's, people, and types of events interwoven in the fabric of Underground Culture.  Initially he started going to Raves, the easiest accessible way to get exposed to a wide variety of popular DJ's who would play music you just couldn't hear anywhere else besides record shops or mixtapes.  Although this was great fun initially, but it could lead to possibly dodgy elements at times, fly by night promoters, and something more was lacking from this movement's direction.  Jack eventually heard rumors of small tribal DJ gatherings, often times held under the light of the full Moon or in other powerful natural locations, where they would gather playing records until Sunrise and beyond.  Intrigued by the deeper Sprituality, he had to learn more and experience this for himself.  He became inspired by the magic these DJ's wielded, and vowed to follow the path of the Electronic Shaman.  He soon began to evangelize the glories of participating in the ritual of dance music all night long.  From the darkest hours of the night to bring in Dawn's break, playing vinyl records in reverence of the Gods of Bass became a sacred experience.  This passion for the Underground earned him the befitting nickname "Turntable-Evangelist", as well as eventually gaining him a reputation for his genre-bending "Sunrise DJ" sets in local Southern California circles.

In 2005, Jack's path finally lead him to Burning Man.  He was re-inspired once again, this time to go beyond just performing at other people's events, it was time to try his hands as a creator.  He brought the color and magic from Black Rock City back to San Diego with him, and began throwing his first Music/Art events on a small local scale.  Unsure what to call them initially, in a quick revelation "Turntable-Evangelism" was born.  It was clearly the purest representation of his vision.  Simple yet elegant, carrying that spark from the old school into the future, this was a name gifted from beyond.  With intentions of fusing the finest elements of Underground Culture with a deeper Spirituality currently lacking from our oversaturated Popular Culture media.  The focus being on DJ culture and live music expression, visual media, performance art, artistry, and unique interpretation of various underground subcultures.  This was the perfect fit for the direction that was already set in motion and had been culminating for years.
________________________________________________________________
a note from Jack:

"We began our first series of 'Turntable-Evangelism presents: Eden' at The Hole in Point Loma, coupling art & music it brought the community together for truly magical times.  We are sincerely grateful everyone involved in participating and to have been able to share those experiences.  It was a lot of hard work and many good individuals came together to make those special parties happen."

Soon Turntable-Evangelism was fortunate enough to gain another residency with Underground Playground at Club Kadan, allowing the opportunity to regularly promote underground dance music of all genres consistently at a no cover charge venue.  This also provided the stomping grounds for a diversity of Underground talent from Southern California and beyond to shine.

With over 16 years of turntablist experience and a lifetime of musical passion, Jack Tripper is the founding father of "Turntable-Evangelism".  A leader, a visionary, and a revolutionary for the Underground.  The Reverend Jack is here to help guide you through the darkest hours.  The Sun will always rise the next day and shine on those who choose to believe.  We believe in the old school, living life through virtue, planting seeds for the future, and building strong family values.  We believe in Magic.  We are all connected and are all a participants in this amazing planet we share.  We can make the conscious decision to better the world around us while living in harmony with the Earth.  We will make change on the Earth through focused efforts towards not-so-random acts of kindness.

Talented individuals wanted: Artists, Musicians, Technical Wizards, Dancers, Healers, Hippies, Freaks, Geeks, Burners, Ravers, Moontribers, Aliens, Breakers, Housecats, Electrokidz, Fairy's, Elves, Pagans, Mystics, Cultivators of Kindness, Transdismensional Travellers, and all Beings of Light are welcomed in our Sanctuary.  We are an all-denominational Church of Sound.  We Evangelize through Music and Art.  We strive to create a self-reliant community by being aware of our natural gifts and sharing them openly for a greater Good.   Any form of contributions, and all forms of help are genuinely appreciated.  Please help the greater effort to spread the Universal message of "Peace Love Unity Respect".  This should feel familiar.  Now is the time that those with purpose are being called and drawn to us.

Come dance to our beat?  The music is REALLY GOOD!  It's not even a cult... or is it?  Find out for yourself.
Turntable-Evangelism:  coming soon to an Underground location near you.  Look for us at the end of the Rainbow.